This game is in beta. It is currently fully playable. It is complete but there may be tweaks or modifications to the rules in the future. If you have played or read the game feel free to send me feedback using this google form.

The year is 2199. Climate change has ravaged Earth. The governments and international organizations of the past lacked the money and resources to stop the inevitable climate catastrophe. Food and shelter became scarce. Millions of refugees left their homes looking for fresh water and temperate climates.

The megacorporations saved us, or so they are fond of saying. All-encompassing companies that operated with no oversight and wielded unprecedented power. They had the money and resources to realize the massive geoengineering projects necessary for the continuity of human civilization. Now what remains of humanity live in a handful of isolated corporate city states, places like Prime City.

Prime City is the first and most powerful corporate city state in the world and home to millions. It is ruled and run by the rich, the CEOs, managers, and celebrities that still made it out on top after the world burned. Their wealth and extravagance have not waned in the year 2199, and neither has the gulf between us and them. The middle class is gone, all that’s left are the 1% who rule and the 99% who do all the work.

You are a freelancing cyberpunk. Tossed aside or sickened by the capitalist greed that runs the city, you take on jobs that no one else can in order to survive, make rent, and help others do the same. You are one of the crews set to carve out a life for themselves in Prime City’s underground, a life free from the wage slave grind. Use the tech the wealthy throw from their spires to break into their own vaults, hack their networks and steal your work back from them, spray your symbol on their corporate logos to remind people that life doesn’t need to be this way.

Neon Black is a game powered by Blades in the Dark about a crew of cyberpunk freelancers trying to find jobs and pay the bills in a corporate dystopia. There are dangerous heists, high-octane chase scenes, artificial realities, friendly and nefarious machines, and high-tech/low life adventures in a corporate city state. We play to find out if the players can thrive amidst the teeming threats of warring corporations, alien artificial intelligences, an unforgiving climate, and the indifference of the extravagantly wealthy.

Choose from 7 characters to play, each with their own special abilities, contacts, and items:

Choose from 3 crews to build and support your characters:

Play in a unique cyberpunk setting. Prime City has dozens of places and notable NPCs to fuel your game, as well as 36 factions including megacorp companies, underworld syndicates, hacker groups, and spiritualists.

For online play feel free to use these Google Sheets for character and crew playbooks, as well as reference sheets.

Get a copy of Neon Black as well as World Maker, Spooky Action at a Distance, One Trillion Years, and more by supporting me on Patreon.

In order to download this game you must purchase it at or above the minimum price of $15 USD. You will get access to the following files:

Support this game at or above a special price point to receive something exclusive.

Everyone who buys a copy of Neon Black on itch.io provides a copy for someone to download free of charge. These community copies of the game are intended for marginalized people and those who are experiencing financial hardships and cannot pay for a copy. If that applies to you help yourself to a community copy. 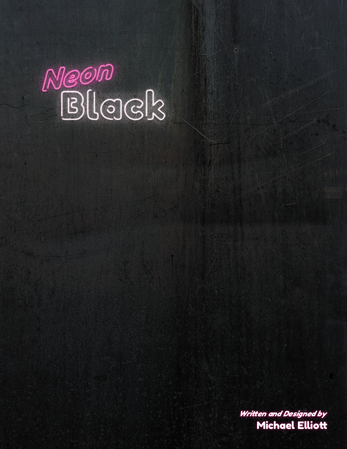